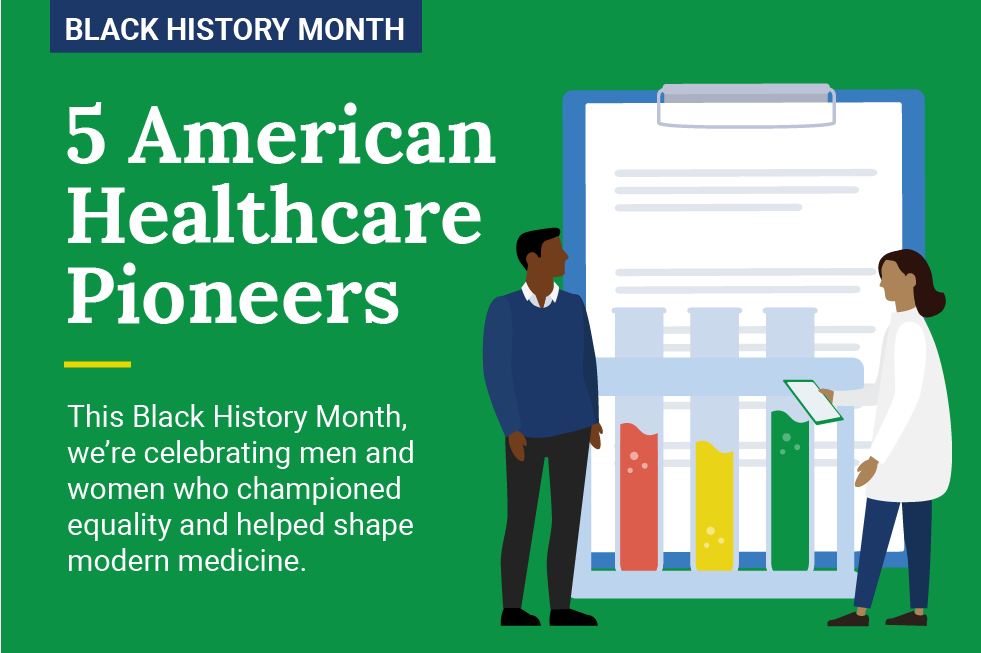 This Black History Month we’re celebrating the achievements of some of America’s healthcare pioneers and honoring the significant impacts they have made on medicine and society.

Smith was also the first black physician to be published in U.S. medical journals, where he “pioneered the use of medically based statistics as evidence against notions of racial inferiority.” Abolitionist Frederick Douglass called Smith the single most important influence on his life.

Before being admitted to its nursing school in 1878, Mary Mahoney worked as a maid at the New England Hospital for Women and Children. In 1879 she became the first black woman in the U.S. to be awarded a nursing degree. After graduating, she worked as a private care nurse for 30 years and served as supervisor of the Howard Orphan Asylum for Black Children in Long Island. The American Nursing Association continues to confer the Mary Mahoney Award to an individual who has made a significant contribution to creating opportunities for nurses of color.

A renowned surgeon, educator and advocate, Charles Drew has been called the “Father of the Blood Bank” for his discovery of a method for long-term storage of blood plasma.

During World War II, Drew worked on U.S. relief program “Blood for Britain” – a program to collect and ship plasma overseas. This became the model for a national blood banking program led by Drew for the American Red Cross. Unfortunately, these programs that he played such a vital part in creating required that blood donations from black people be segregated from donations made by white people. The Red Cross program initially did not allow for African Americans to donate at all – ironically excluding Drew himself. Drew was openly critical of these policies, condemning them as unscientific. He ultimately resigned his position at the Red Cross in 1942 and went on to work as the head of Howard University’s Department of Surgery and then chief surgeon of the university’s Freedmen’s Hospital.

Drew believed that medical education for African Americans “has not only opened a small passageway to the outside world, but is carving a road in many untrod areas, along which later generations will find it more easy to travel.”

When Jane Cooke Wright joined the Cancer Research Foundation at Harlem Hospital in 1949, chemotherapy was still mostly experimental. Much of her work focused on analyzing anti-cancer agents and exploring the relationship between patient and tissue culture response. Wright went on to develop new techniques for administering cancer chemotherapy.

In 1964, she was appointed to President Johnson’s President’s Commission on Heart Disease, Cancer and Stroke, and in 1971 she became the first woman president of the New York Cancer Society.

Patricia Bath became the first African American to complete an ophthalmology residency in 1973. In 1976, she co-founded the American Institute for the Prevention of Blindness, a non-profit dedicated to the prevention of blindness through education, community service, research and compassionate eye care services.

In 1988 Bath received a patient for her invention, the Laserphaco Probe. This device created a less painful and more precise treatment for cataracts. She was the first African American female doctor to receive a patent for a medical purpose. Her device helped restore the sight of individuals who had been blind for more than 30 years.

These are just a few examples of the many great African Americans who have championed equality and helped to shape modern medicine. Learn more about Black History Month from history.com.